The site is located 17 miles north of Tularosa, NM, and 28 miles south of Carrizozo, NM on U.S. 54. Turn east from U.S. 54 at Three Rivers onto County Road B30 and travel five miles on paved road, following signs.

The Three Rivers Petroglyphs are outstanding examples of prehistoric Jornada Mogollon rock art. The basaltic ridge rising above the Three Rivers Valley contains over 21,000 petroglyphs, including masks, sunbursts, wildlife, handprints, and geometric designs. The number and concentration of petroglyphs make this one of the largest and most interesting rock art sites in the Southwest. A rugged 0.5-mile trail (Petroglyph Trail) begins at the visitor shelter and links many of the most interesting petroglyphs. Another short trail (Village Trail) begins on the east side of the picnic area and leads to a partially excavated prehistoric village.

The Three Rivers Petroglyph Site is one of the few locations in the Southwest set aside solely because of its rock art. It is also one of the few sites giving visitors such direct access to petroglyphs. The number and concentration of petroglyphs here make it one of the largest and most interesting petroglyphs sites in the Southwest. More than 21,000 glyphs of birds, humans, animals, fish, insects and plants, as well as numerous geometric and abstract designs are scattered over 50 acres of New Mexico's northern Chihuahuan Desert. The petroglyphs at Three Rivers, dating back to between about 400 and 1450 AD, were created by Jornada Mogollon people who used stone tools to remove the dark patina on the exterior of the rock. A small pueblo ruin is nearby and Sierra Blanca towers above to the east. A detailed petroglyph guide is available at the Three Rivers Petroglyph Site.

A rugged half-mile trail (Petroglyph Trail) begins at the visitor shelter and links many of the most interesting petroglyphs. Another short trail (Village Trail) begins on the east side of the picnic area and leads to the remains of a Mogollon village, whose inhabitants were likely responsible for the petroglyphs. Occupied for about 400 years, the site was partially excavated in 1976. On the village site, there are foundations of three types of prehistoric buildings. A small pueblo ruin is nearby and Sierra Blanca towers above to the east. Just up the road is Three Rivers Campground  (closed due to fire damage) and an entry point into the Lincoln National Forest.

The site offers five shelter sites with picnic tables and cooking grills (one is handicap accessible); one group site that has three picnic tables under a shelter and two grills; two RV sites have covered picnic tables and grills and water and electric hookups.  Five locations are also established for tent use, within defined boundaries.  One of the tent locations is at the handicap accessible site.  Restrooms and drinking water are available.  Pets are allowed in the campground (on leash), but are not allowed on the trails. 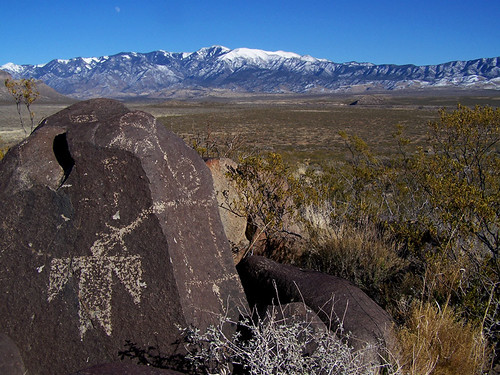