The south end of the Byway begins 11 miles east of San Antonio via US 380 at County Road A-129. From the north, take the Escondida exit off of I-25 and follow the east frontage road to the north to Escondido Lake. Head east and pass over the Rio Grande. At Pueblito, turn right and head south for about 1 mile to the beginning of the Byway. Turn left and go east and look for the Byway signs and information.

The Quebradas Backcountry Byway is an unpaved county road traversing about 24 miles of rugged, colorful landscapes east of Socorro. Two National Wildlife Refuges are only a few miles from this Byway - Sevilleta to the north and Bosque del Apache to the south. Much of the Byway includes rolling bench lands that rise above the Rio Grande floodplain to the west and rugged north-south running ridges of alternating bands of red and yellow sandstone, red and purple shale, and white to gray limestone.

The region includes upper Chihuahuan desert mountain ranges with sparse vegetation. The Quebradas road crosses several arroyos which drain into the Rio Grande. Erosion has created scenic geological settings such as the Arroyo de la Presilla, Arroyo del Tajo, and the Loma de las Canas ridgeline. Many areas along the road contain near vertical, multicolored cliffs, twisted and convoluted badlands, narrow box canyons, and other topographic landforms. Colorful soils and banding of rock formations can be viewed midway through the drive. 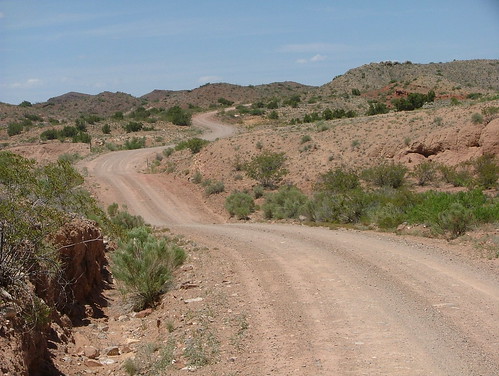