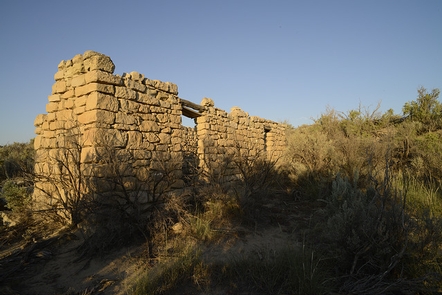 These directions originate from Counselors Trading Post on US 550, approximately one hour south of Farmington or one half hour north of Cuba, NM.

On the east side of the Counselors Trading Post, proceed north on Rio Arriba County Road 379 8.4 miles to a major road intersection. Turn left (west) onto the main Largo Canyon road toward the cell tower, and proceeded 2.3 miles to Tafoya Canyon (signed). Turn left (west) and proceeded .3 miles to the Margarita Martinez Homestead. The homestead is visible on the north side of the road.

From Tafoya Canyon, proceed 1.2 miles north on the Largo Canyon road to a very visible group of large industrial tanks that are sometimes referred to as Tank City and/or Apache Junction. Turn right (east), and proceeded .2 miles. Turn right (south), and proceeded .6 miles and cross Largo Wash. After crossing Largo Wash, take the first left turn (east), and proceeded .9 miles to a plugged and abandoned well location. Park and follow an old two-track road to the south along the base of the cliffs to the Martin Apodaca Homestead. It is about .7 miles to the homestead up a small unnamed canyon.

Note: An alternate route back to US 550 can be taken on Rio Arriba County Road 378 as it heads generally southwest from the large industrial tanks. Proceed 9.8 miles, and you will arrive at US 550 on the east side of the Lybrook gas plant.

The Margarita Martinez Homestead consists of a four-room sandstone house, a large corral, and an irrigation canal located in Tafoya Canyon. The homestead was constructed between 1908 and 1922. Margarita Martinez was originally from the Corrales area where she lived with her husband, Juan. After Juan's death, she moved to Largo Canyon in 1904 with her children. Margarita passed away in 1919 following a wagon accident, and management of the homestead passed to other family members. Although patents were filed on the homestead in 1935, the home remained on public lands presumably due to an error in writing the legal description in the filing of the patent.

The Martin Apodaca Homestead, located at the head of a small canyon once known as Pollito (Little Chicken) Canyon, consists of three buildings and a corral built between 1907 - 1918. This land was later acquired by the Berry Cattle Company. The historical record suggests the homestead was abandoned sometime prior to 1930.

Most remarkable is that one of the buildings was used as a church. Locally known as Nuestra Seсora de la Buena Pastora (Our Lady of the Good Shepherd) appears in the Archdiocese of Santa Fe records from 1915 at the Church of the Divine Pastor in Haynes, New Mexico. Nuestra Seсora was served by the parish in Farmington and visited "every couple of months" by Padre Alberto.