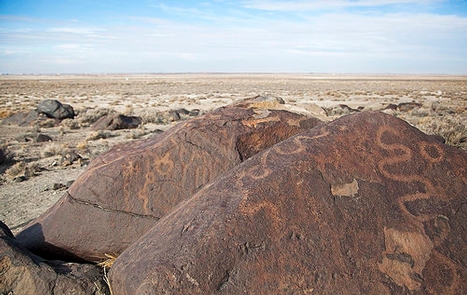 From Fallon, head east on US Highway 50 approximately 12 miles until you see the archaeological site sign on the left (north side).

Grimes Point is an archaeological site which was listed on the National Register of Historic Places in 1972. During the Pleistocene Epoch, this area and most of northwestern Nevada, was covered by ancient Lake Lahontan. Over the last 10,000 years, the level of ancient Lake Lahontan fluctuated widely, at times drying up completely. When above water, the Grimes Point area would have been marshland with a wide variety of wetland plants and animals available for use by prehistoric populations. Grimes Point was first visited by Native Americans perhaps 8,000 years ago or more.

Grimes Point is a field of basalt boulders that are covered with a glossy black patina, commonly called desert varnish. Many of the boulders are covered with pecked or carved rock art called petroglyphs. The antiquity of many of the petroglyphs can be evidenced by how varnish has completely repatinated the carved surfaces.

Visitors today can view examples of petroglyphs along a 1/4 mile, self-guided interpretive trail. The trail was originally constructed by the Youth Conservation Corps and named Nevada's first National Recreation Trail in 1978. Handicapped accessible restrooms and picnic facilities are available at this popular stop on U.S. Highway 50.

Check out the Churchill County Museum in Fallon and the Nevada State Museum in Carson City for additional displays about prehistoric Nevada and Grimes Point and Hidden Cave. Please stay on the trail and help ensure this special place remains for future generations by respectfully viewing the petroglyphs. Take nothing but photographs. Please do not touch, chalk, create rubbings of the petroglyphs, or damage them in any way.

Hidden Cave is an archaeological site which was listed on the National Register of Historic Places, in 1972, as part of Grimes Point. The cave itself was formed around 21,000 years ago by the waves of rising Pleistocene Lake Lahontan. In the mid-1920's, the cave was found by four school boys, the first 20th century humans to do so. The cave has been excavated by archaeologists three times: once in 1940, again in 1951, and finally a large excavation in 1979-1980 by the American Museum of Natural History. A high proportion of the artifacts found in Hidden Cave were unbroken and arranged in concentrations. That led to the conclusion that 3,500 to 3,800 years ago people used the cave more as a cache (a place to store objects for later) than for habitation.

The BLM gives free public tours of Hidden Cave on the second and fourth Saturdays of each month with the exception of any three day weekend where the Friday or Monday is a federally recognized holiday, like Memorial Day, Thanksgiving, and Labor Day. The tours begin at the Churchill County Museum in Fallon, at 9:30 a.m. with a special video showing, and then the group caravans out to Hidden Cave and walks up the trail to the cave entrance. The tours end by 12:00 p.m. Additionally, tours for private groups can be arranged to be given at other times by docents from the Churchill County Museum. If you plan to visit Hidden Cave, please wear sturdy walking shoes, bring water, and dress appropriately for the weather (it can change in a hurry during every season).

Hidden Cave can only be accessed through taking a scheduled tour. The site is on a 1/2 mile interpretive loop trail that is not handicapped accessible. The tour may not be suitable for very young children because of its length and the climb up the hill.