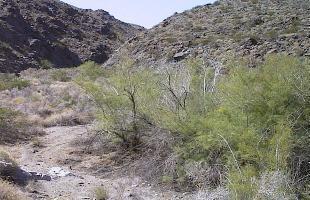 This area encompasses the jagged, steep, rust-colored Dead Mountains and the alluvial fans sweeping to the west towards Piute Valley and east towards the Colorado River. Centered in the northern half of the wilderness is its highest point, Mount Manchester at an elevation of 3,598 feet. Picture Canyon (a spring location and major wash) transects the wilderness in the north and the Piute Wash borders the wilderness on the west. Vegetation is predominantly creosote bush desert scrub and desert wash scrub. The northern most occurrence of smoketrees in the California Desert Conservation Area (CDCA) is found within the area's washes. Wildlife is typical for the Mojave Desert; including a small herd of bighorn sheep, coyote, black-tailed jackrabbits, ground squirrels, kangaroo rats, roadrunners, chucker, quail, prairie falcons, red-tailed hawks, golden eagles, rattlesnakes, and several species of lizards. The eastern and northeastern portions of the wilderness provide critical habitat for the threatened desert tortoise. The wilderness is located along the eastern border of the sector and consists of 47,157 acres. The wilderness is easily accessible on all sides by BLM routes and OHV intrusions are common along the eastern and northern boundaries. The wilderness borders Nevada and receives visitation from people at camp sites just across the state line. Also, the wilderness area had several existing right-of-way roads along its eastern boundary when it was established. These roads have continued to be used by the right-of-way holders and the public. Please follow the regulations in place for this area, and use Leave No Trace techniques when visiting to ensure protection of its unique natural and experiential qualities.

How to follow the seven standard Leave No Trace principles differs in different parts of the country (desert vs. Rocky Mountains). Click on any of the principles listed below to learn more about how they apply.

Regulations:
Motorized equipment and equipment used for mechanical transport are generally prohibited on all federal lands designated as wilderness. This includes the use of motor vehicles (including OHVs), motorboats, motorized equipment, bicycles, hang gliders, wagons, carts, portage wheels, and the landing of aircraft including helicopters, unless provided for in specific legislation. In a few areas some exceptions allowing the use of motorized equipment or mechanical transport are described in the special regulations in effect for a specific area. Contact the agency for more information about regulations.