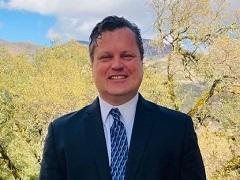 UKIAH, Calif. — Nicholas “Nick” Lavrov is embracing the challenge of serving as the Bureau of Land Management Ukiah Field Manager overseeing management of more than 270,000 acres of public land within nine counties in northern California.

“There’s never a dull moment. There are so many complex, multi-faceted issues in managing our BLM public lands and balancing the various uses in our multiple-use mission,” Lavrov says. “I enjoy working with the Ukiah Field Office staff who are very knowledgeable and dedicated to caring for our resources. I look forward to helping to improve our recreation areas and protecting our riparian areas.”

The challenges of the job became apparent immediately for Lavrov. On his second day, the LNU Lightning Complex Fire started, burning more than 360,000 acres, including more than 46,000 acres of public lands managed by the Ukiah Field Office. Lavrov and his staff are still dealing with recovery.

Lavrov grew up in the North San Francisco Bay Area. In the late 90s, he started his career with the National Park Service as a senior park ranger, managing special uses at the Golden Gate National Recreation Area, which includes Alcatraz Island. He has also served as a patrol ranger and inspector for the San Francisco Water Department, as a watermaster for the U. S. Bureau of Reclamation, and as park manager for the U.S. Army Corps of Engineers. Additionally, Lavrov has experience serving on incident management teams for emergency response.

“We are fortunate to have Nick on our team,” says BLM Central California District Manager Chris Heppe. “His experience and leadership in natural resource management combined with his knowledge of the northern California inland and coastal areas have been valuable additions to our Ukiah Field Office.”

Lavrov succeeds Amanda James, who moved to a position with the BLM in Montana. When not in the office, he enjoys traveling, gardening, hiking and skiing.