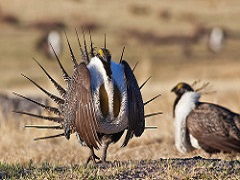 The decisions received bipartisan support from the governors who sought revisions to the plans that guide conservation of sagebrush steppe habitat on BLM-administered public lands in their respective states.  The goal was to better align BLM plans for managing habitat with state plans for conserving the species.

“Months of close coordination and cooperation with state governments in Wyoming, Nevada, California, Idaho, Oregon, Utah and Colorado have gone into the development of today’s decisions,” said Acting Secretary of the Interior David Bernhardt. “The plan amendments adopted today show that listening to and working with our neighbors at the state and local levels of government is the key to long-term conservation and to ensuring the viability of local communities across the West.”  [See article: Governors welcome plan revisions]

“Since the very beginning of this effort, all partners have maintained the need to conserve the sage grouse and avoid the need to list the species as threatened or endangered,” said Brian Steed, BLM Deputy Director for Policy and Programs. “We also share a commitment to conservation that does not put the West’s communities at risk and which balances between regulation and access.  We believe that the better outcomes for the species under these plans will demonstrate the value of coordinating federal and state authority.”

The decisions affect resource management plans for BLM-administered public lands in seven Western states, where the BLM manages habitat and states manage wildlife species.  Together, the amended BLM plans retain the priority habitat designation (PHMA) for more than 29 million surface acres of BLM-administered sagebrush-steppe, where the management priority is to exclude or avoid disturbance to sage-grouse and their habitat, and to minimize effects where PHMA cannot be avoided.  Another 23 million surface acres retain identification as general habitat (GHMA), where avoidance and minimization are applied flexibly, in line with local conditions and a state’s science-based objectives for species management.

Including 3.4 million acres of PHMA and 2.4 million acres of GHMA in Montana and the Dakotas – whose BLM sage-grouse plans are not being amended – a total of 32.4 million surface acres will be managed as priority habitat across the Greater Sage-Grouse’s range, while another 25.6 million surface acres are designated general habitat.  The plans for BLM lands in Nevada, Idaho and Colorado include additional habitat categories, acreages and management objectives specific to their respective states.

Greater Sage-Grouse populations in California are concentrated in the northeastern part of the state and are genetically linked with populations in Nevada.  On the basis of this science, the BLM will manage habitat on public lands in Lassen, Modoc, Plumas and Sierra counties using provisions for similar habitat in Nevada.  In cases where California state wildlife officials recommend compensatory mitigation for projects that affect BLM-managed habitat, California has agreed to use the state of Nevada’s tool for quantifying habitat.

Benchmarks, or “trigger” points, for local sage-grouse populations remain in place for BLM-managed habitat to indicate when adaptive management measures are needed to address population declines.  The amended plans also outline procedures once it is determined that a decline has been stopped and reversed.

The plans build on those put into place in 2015.  In 2017, the BLM began scoping for the new plans asking whether “some, none or all” of the 2015 sage-grouse plans should be amended.  Seven of 11 affected states asked for changes, and the BLM and the Department of the Interior worked with each to design range-specific modifications.

The decisions also formalize coordination between the BLM and respective states in applying mitigation measures to approved actions.  The state-specific arrangements recognize that the BLM does not have authority to require compensatory mitigation for otherwise allowable activities on public lands while supporting each state’s plan and authorities for mitigation.

The planning effort that concludes with today’s decision began in 2017 when governors of most of the affected sage-grouse states asked the BLM to revisit existing plans for managing sage-grouse habitat and adapt them to better meet the needs of individual states.  In response, the BLM proposed changes developed in collaboration with governors and state wildlife agency professionals in the seven affected states, as well as other concerned organizations and individuals, largely through the Western Governors Association’s Sage-Grouse Task Force.

The decisions reflect the BLM’s determination that greater flexibility was needed to manage habitat and respond to the particular needs of each state's landscapes and communities.

The decisions and supporting documents are available online https://goo.gl/7wdKmM.

Download a photo of the sage grouse. (Bob Wick/BLM)