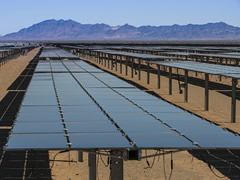 Sonoran West Solar Holding LLC., has requested a rights-of-way authorization to construct, operate, maintain, and decommission an up to 350-megawatt photovoltaic facility along with necessary ancillary facilities, including up to eight project substations, access roads, operations and maintenance buildings, and lay-down areas. The project site consists of approximately 2,700 acres of BLM-managed land.

“The Crimson Solar Project supports the economy and is an example of the Administration’s America First Energy Plan,” said Doug Herrema, BLM Palm Springs-South Coast Field Manager. “If approved, it’s anticipated to create approximately 650 jobs during construction, with an average workforce of 62 to 320, during a two-year period. It will also create approximately 10 permanent and 40 temporary jobs, during operations and maintenance, over the life of the project.”

In coordination with the California Department of Fish and Wildlife, the BLM will prepare a joint-Environmental Impact Statement and Environmental Impact Report and possibly a Plan Amendment to analyze the site-specific impacts of the proposed BLM ROW grant and other permit approvals required by CDFW, as well as potential amendments to the California Desert District Area Plan.

Two joint BLM and CDFW public scoping meetings will be announced with dates and locations at least 15 days in advance through the media, including in newspapers and via the BLM website at: https://eplanning.blm.gov.

The Notice of Intent scheduled to publish in the Federal Register on March 9, initiates a 30-day public scoping period that ends on April 9. The public is encouraged to comment on issues, concerns, potential impacts, alternatives and mitigation measures that should be considered in the analysis of the proposed action.

The scoping comments received will be considered during preparation of the draft environmental documents; comments will be available for public review in summer 2018. The environmental review will analyze the site-specific impacts on various resources.

Further details can be found at the BLM webpage at: https://eplanning.blm.gov. For more information, contact Miriam Liberatore, project manager, by telephone at 541-618-2412, or email mliberat@blm.gov.