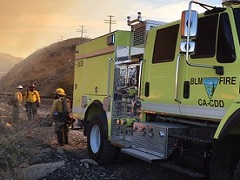 MORENO VALLEY, Calif. – Effective immediately, the Bureau of Land Management has reduced fire restrictions in some areas of public lands in Southern California managed by the California Desert District.

“Even though fire restrictions have been reduced for some areas of the California Desert District, fire safety is still our biggest priority,” said BLM California Desert District Manager Andrew Archuleta. “The BLM is committed to keeping public landscapes healthy and productive. It’s important to be very careful when using fire or participating in recreational shooting on public lands. Under the right conditions, wildfires can start easily, spread rapidly, and become dangerous quickly.”

During Red Flag Warnings and Fire Weather Watches, as determined by the National Weather Service, all recreational shooting and use of campfires, regardless of stage restrictions, will be temporarily suspended to reduce the potential of unintended wildland fire ignitions.

This order will remain in effect until Dec. 31, 2020 unless terminated sooner. Early termination of this order could occur if there is a substantial reduction in the fire danger in the areas under Stage III restrictions.

The BLM greatly appreciates the public’s cooperation in helping to minimize the number of human-caused wildfires. The public is reminded to exercise extreme caution when using fire and to follow these precautions:

1)  Make sure to have a five-foot circle cleared around a campfire.

2)  Have a shovel and plenty of water on hand and put the fire DEAD OUT before leaving.

3)  Recreational target shooters are encouraged to carry a fire extinguisher.

4)  Park motor vehicles away from locations where exhaust could cause grass or other combustibles to ignite.

Specific descriptions of fire restrictions, a fire restrictions map, and a copy of the fire order is available at https://go.usa.gov/xPznq. An interactive map and listing of fire restrictions throughout BLM California are available at https://go.usa.gov/xmUEG. To obtain a valid free California Campfire Permit, visit www.preventwildfireca.org/Campfire_Permits.  For alternative recreational target shooting locations visit www.wheretoshoot.org. To learn how you can prevent wildfires visit www.readyforwildfire.org. You can also find additional information about wildfires on CAL FIRE’s Website at http://www.readyforwildfire.org/One-Less-Spark-Campaign/.

Anyone found guilty of violating a fire prevention order may be fined up to $100,000 and/or imprisoned for up to 12 months. Restitution for total fire suppression and damage costs incurred may be borne by the trespasser.

Download a photo of a BLM fire engine. (BLM photo)