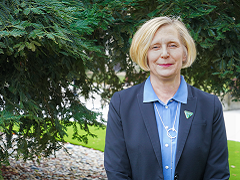 “I am excited to join the California team and look forward to meeting with employees, partners and stakeholders,” Mouritsen said. “Partnerships are pivotal to managing these beautiful landscapes and natural resources that support generations of families and local communities, providing important benefits to Californians and the nation.”

Mouritsen, a 27-year career public servant, comes to the California post after serving the past three years as the State Director for the BLM Eastern States Office, which manages BLM lands and minerals in 22 states along and east of the Mississippi River. In addition, she served as a Regional Facilitator for the Department of Interior reorganization effort.

Over the course of her career, Mouritsen has spent time in Washington, D.C., serving in key leadership roles. These include senior level positions as the BLM Deputy Assistant Director for Energy, Minerals, and Realty Management, BLM Budget Officer and BLM liaison to the Assistant Secretary for Land and Minerals Management where she advised and briefed senior leadership on renewable energy, wildlife, wilderness, recreation, land use planning, and interagency cooperation with military partners. Mouritsen also worked as Acting State Director in Alaska and New Mexico, as well as Acting Associate District Manager in the BLM Southern Nevada District Office in Las Vegas and the Medford District Office in Oregon.

Prior to working for the BLM, Mouritsen served as an attorney advisor in the Interior Department's Office of the Solicitor for 10 years beginning in 1992. There she provided legal expertise on BLM issues, including endangered species, land use planning and forestry matters. Mouritsen—a native of Dallas—received her bachelor's degree from the University of Texas at Austin College of Engineering in 1983. She earned her Juris Doctor degree at the University of Texas at Austin Law School in 1992 before launching her Federal career.

As BLM California State Director, Mouritsen will lead a team that administers 15 million acres of public lands and 42 million acres of minerals and energy resources in California, as well as 1.6 million surface acres in northwestern Nevada. BLM public lands extend across coastal areas, rangelands, forests, high mountains and deserts making California one of the most diverse states in the nation.

Mouritsen takes over from Acting State Director Joe Stout, who will return to his post as BLM-California Associate State Director, where he will work closely with Mouritsen to ensure continuity of leadership.