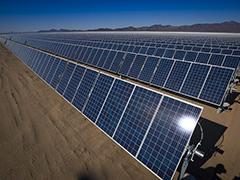 PALM SPRINGS, Calif. — The Bureau of Land Management has issued the final approval for construction of the Oberon solar project on about 2,600 acres of BLM-managed land near Desert Center in eastern Riverside County, a significant milestone in the Biden-Harris administration’s efforts to modernize America’s power infrastructure in the West and permit at least 25 gigawatts of solar, wind, and geothermal production on public lands by 2025.

“This solar project is the third project approved for full construction under the Desert Renewable Energy Conservation Plan and an example of how public land in California plays a big role in achieving the Biden-Harris administration’s goal to achieve 100 percent carbon-free electricity by 2035,” said Karen Mouritsen, BLM California State Director. “The BLM is committed to responsible renewable energy development that balances conservation and utilization of public land.”

The Notice to Proceed, issued by the BLM Palm Springs – South Coast Field Office, authorizes Oberon Solar LLC to begin full construction for the project. The project will generate up to 500 megawatts of renewable energy, enough to power approximately 146,000 homes, and includes 500 megawatts of battery storage.

The Oberon Solar Project is in an area analyzed and identified as suitable for renewable energy development as part of BLM’s Desert Renewable Energy Conservation Plan Land Use Plan Amendment. Oberon Solar is one of three Desert Renewable Energy Conservation Plan projects announced by the Department of the Interior in December 2021, which represent the first projects to be approved.

The Desert Renewable Energy Conservation Plan is a landscape-level plan focused on 10.8 million acres of public lands in the desert regions of seven California counties that streamlines renewable energy development while conserving unique and valuable desert ecosystems and providing outdoor recreation opportunities. To approve these sites for renewable energy projects, the Department of the Interior and the BLM work with Tribal governments, local communities, state regulators, industry, and other federal agencies.

The BLM is currently processing 64 utility-scale onshore clean energy projects proposed on public lands in the western United States. This includes solar, wind and geothermal projects, as well as interconnect gen-tie lines that are vital to clean energy projects proposed on non-federal land. These projects have the combined potential to add over 41,000 megawatts of renewable energy to the western electric grid. The BLM is also undertaking the preliminary review of 90 applications for solar and wind development, as well as 51 applications for wind and solar energy testing. Additional information, including the National Environmental Planning Documents, and associated documents are available on ePlanning at the Oberon Solar webpage.