Ninety-seven percent of Americans who live in urban population areas have access to high-speed internet and broadband services, but in the nation’s rural areas, access is often hard to come by.  The past administration recognized this disparity when signing Executive Order 13821 (EO 13821), Streamlining and Expediting Requests to Locate Broadband Facilities in Rural America, on January 18, 2018.  The Bureau of Land Management, which manages more than 245 million acres of public land in 12 Western states, is uniquely positioned to help change those facts by making public lands available for broadband infrastructure.

The socioeconomic benefits of broadband cannot be overstated.  It allows for greater economic growth among subscribers, providing access to better health care and educational opportunities while enhancing civic participation.  Still there exists a digital divide, which can be attributed to both location and total population, and can result in fewer economic opportunities for both.

Establishing broadband service requires infrastructure. This infrastructure is already located in high-population areas.  To connect rural America, towers must be constructed and fiber-optic cable must be buried.   Before a tower can be built, the road to it must first be constructed.  Often on BLM lands, the paths to these sites already exist, and can more easily be developed. The BLM is working to streamline processes such as this in order to allow for greater connectivity.  Fortunately, the Department already administers a significant amount of land as well as existing permitted infrastructure that can be leveraged for increased broadband in rural America.  By making it easier for private industry to colocate in existing facilities or build out new broadband infrastructure on public lands, the DOI can play a strong role in increasing connectivity throughout the United States.

Cellular carriers continue the build-out for their service areas in the western United States reaching rural population areas where DOI-administered lands will play an integral role in delivering rural broadband service.  It is important to note that many public lands, especially around wilderness areas, lack any form of mobile connectivity, and this in turn can burden the ability for search and rescue operators to respond quickly to public emergencies, such as natural disasters, wildland fires, or missing persons. Improving connectivity on public lands will benefit search and rescue teams by improving communications and interoperability in response situations, and allow public safety officers to locate individuals in need of help or rescue more easily.

The BLM employs staff members who are specialized in the siting and permitting processes that are required to establish this infrastructure, including those for issuing right-of-way grants and leases.  Our specialists act as facilitators for larger companies and smaller, local internet providers. 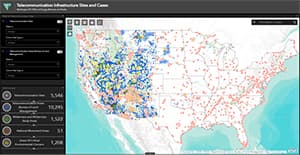