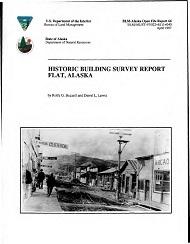 In July and August of 1993, staff from the Alaska Archaeological Survey unit of the Office of History and Archaeology (OHA), Alaska Division of Parks and Outdoor Recreation, conducted a historic structures survey in the town of Flat, Alaska. The survey was carried out under a Cooperative Agreement between the United States Department of Interior, Bureau of Land Management and the State of Alaska, Department of Natural Resources to document and evaluate historic properties associated with the lditarod National Historic Trail.

Located in southwest Alaska between the Kuskokwim and Yukon rivers, Flat was the largest mining camp in the lditarod mining district. Gold was discovered in Otter Creek in the winter of 1908 and the town of lditarod developed as the supply center for lhe district. Flat began as a small mining camp at the confluence of Flat and Otter creeks. By the 1920s, it supplanted lditarod as the supply center and largest town in the lditarod district. The residents built the town on mining claims. Flat also became an important destination on the lditarod Trail, which linked the remote mining camps and towns between Seward and Nome. Tbe claim holders and large scale mining operators blocked efforts to incorporate the town and Flat was never platted. Gold mining activity focused on the creeks surrounding Flat until the 1920s, when rich gold bearing gravels were discovered under the town. Between the l 920s and the 1960s, natural disasters and several mining operators conducted large scale mining within the town, forcing merchants and residents to move their buildings. Over the years, mining activity transformed the appearance of the town. The buildings, structures and sites that survive illustrate the historic themes of ruining, commerce and community development.