"Lodes" to clean up 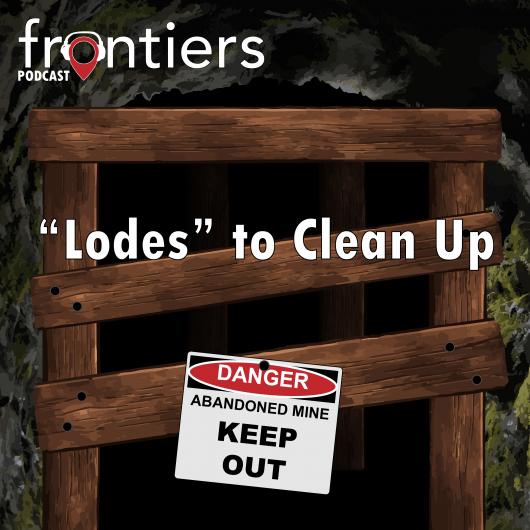 [Jim Hart]: Welcome to the BLM Alaska Frontiers podcast, I'm Jim Hart. Alaska has had more than a few buried or forgotten manmade hazards, ranging from vehicles to hazardous waste. Abandoned mine sites are infamous for containing drums of hazardous chemicals used in processing various ores, and buried military hardware is sometimes discovered on old military sites. Most of the time, the materials weren't intentionally left as a hazard. Much of the contamination happened before environmental protections were put in place, and most people simply didn't understand the long term consequences. Out of sight, out of mind. Unfortunately, some contaminants have real staying power and need to be cleaned up. When those hazards are found on public lands, it's up to people like Mike McCrum to oversee the remediation. He leads BLM Alaska's hazardous materials and remediation program, and he's seen his share of cleanups, big and small. Mike, thanks for joining us.

[Mike McCrum]: Oh, thanks for inviting me, Jim.

[Jim Hart]: Mike, when did you start working in the remediation business?

[Mike McCrum]: Well, I finished school in 1985 with a master's in geology, kind of focused on geochemistry, and I went to work for a large engineering firm. Pretty much right out of school, working as a hydrogeologist doing environmental work and water supply projects at a time when there was a lot of opportunity for people with that kind of background.

[Jim Hart]: That's an interesting time to start working in your field. What kinds of changes have you seen?

[Mike McCrum]: When I first started working the field, if you will, of, you know, contaminated sites, work was really quite young.

[Mike McCrum]: The firm that I went to work for was one of the first engineering firms to get a large cleanup contract with the EPA. And at that time, some of the regulations that have now been in place for a long time were just coming online and there was a lot of learning, both on the part of the government regulators and on the part of the people within industry that I represented trying to understand what the nature of the problems were and how to address them. Since that time, the industry has grown, matured and transitioned from one of basically investigation to one where site cleanups are expedited much more routinely than they used to be. So it's kind of matured and actually as a market, it's sort of decreased over the last 10 to 15 years. There is much more of an emphasis these days on the kinds of environmental actions through the National Environmental Policy Act and other regulatory vehicles to prevent the kinds of legacy issues that we were dealing with back in the 80s and 90s.

[Jim Hart]: So the emphasis has shifted to prevention rather than cleanup, which is preferable in most context. But prevention is also very expensive, isn't it? I mean, there's a lot of design and environmental work to do up front and and that costs money.

[Mike McCrum]: It does cost an awful lot of money, and as much as it impacts, you know, the development of a project on the front end, from a budgetary perspective, it also adds an awful lot of time that it takes to get a project permitting and operational, which translates to money.

[Mike McCrum]: But I think if you take a little bit more holistic view, while the prevention takes time and it takes money, if you didn't [do things] more along the lines that we are now, emphasizing upfront planning and prevention, rather than focusing our energies on cleaning up on the back end, it takes more time and a lot more money to do it [the old] way. So it is a bit of a burden on industry, but it I think the country as a whole is served well by the transition that we've seen over the last 30 to 40 years.

[Mike McCrum]: I think that's a good way to put it, Jim. You know, when I first started working in the mid 80s, it was the first time where some of the techniques and methodologies that we take for granted now were being developed. And that began with kind of a new appreciation for the impacts of some of the practices that were standard before on natural media, such as groundwater. You know, back in the old days, if you buried it, it was gone. And it wasn't until we understood that, you know, sometimes you bury something, it's not gone, and it's certainly not in a situation where it's not affecting things. It could actually have a significant impact, just you can't see it. So we did a lot of learning back in those days and we, like I said, we've developed a lot of methods that are pretty standard now.

[Mike McCrum]: And I think that a lot of what you see operationally from resource development companies reflects that learning curve.

[Jim Hart]: How do you see the legacy of mining advancing in the coming decades?

[Mike McCrum]: Well, I guess I see it somewhat on the trajectory that we're on now. I believe that we will continue to require that resource development companies demonstrate at the beginning of their project that they can do their work in an economically and environmentally viable way. But I also think that, you know, mining has always been a significant part of what we do, and I expect that that will continue. So I think things will change. I think technology will evolve. I think the kinds of mineral resources that we emphasize in our mining industry will probably change, as well, as we transition our overall economy. I believe that we will continue to stay on the prevention track that we're on now.

[Jim Hart]: Mike, thanks again for joining us and thanks for all the work you and your team do.

[Mike McCrum]: Appreciate it talking to you, Jim.

[Jim Hart]: That's it for this podcast to get a real world example of what Mike works on. Go to the BLM Alaska website and search for Red Devil Mine. There you'll see the proposed plan and other documents relating to the cleanup of the abandoned Mercury mine. The Frontiers podcast is a production of the BLM Alaska Office of Communications.